Portrait – Eric Pourtau-Mondoutey, who started his job just three months ago, has already imposed his style and won his students’ hearts. 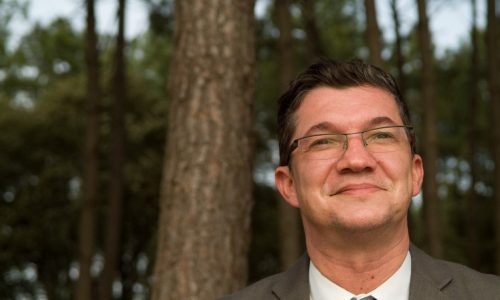 After a mere few months, everyone thinks that this job was tailor-made for him. Eric, a charming, elegant and authentic man who always smiles, puts “emotions” in the heart of his job. “For me, the first rule is to understand that when there are clients, they are the one and only center of interest.” Eric has applied this rule since he started. Once he got his bearings, he quickly forged close relationships with his students and gained their trust, while working to meet the expectations of demanding guests.

Service: how he was raised

When he was in middle school in Orthez, he already wanted to serve others and had natural interpersonal skills, honed in the restaurant where his mom worked. He decided to quit the general stream of studies and do a Certification of Professional Aptitude (CAP) in restaurant services. He continued with a Technical School Certificate (BEP), then a professional high school diploma at the Biarritz Hotel Lycée. He then did his military service as a steward in the Navy, but Eric didn’t forget his vocation. “I had a unique opportunity in the Navy. This is the only part of the armed forces that where service in the restaurant is still done with white gloves, crystal glasses, etc. Just like in a palace!”

When he finished, he was hired as a busboy at the Relais de Margaux, and then worked for two years as a captain at the Mercure Cite Mondiale in Bordeaux. However, Eric really wanted to work in the rooms division. After working for a short time on the night shift, he left Bordeaux and went to Paris where he worked as the reception desk agent and then the reception desk manager at the Mercure Paris Tour Eiffel Hotel.

After this Parisian experience, Eric had a challenge and for seven years he managed a tobacco and newspaper shop in his native region of Béarn.

“I thrive on challenges and don’t regret this job at all, but as time went by, I understood that I really wanted to work in hotel services. I quickly found a job at the front desk at the Golf du Medoc. Just six months later I was hired as the Assistant Rooms Manager, and that was my turning point.”

After serving others, what Eric likes best in his job is the human factor: managing and training his team. He never lost sight of a dream that he had always had of teaching hotel and restaurant services. When Vatel Bordeaux offered him the job of managing the Hotel’s rooms division and its students in their internships or practical application weeks, he jumped at the opportunity.

“I was expecting this to be a lot more difficult, but these students are all longing to learn and I quickly understood that I could do a lot of convey my expertise and experience to them. I give them a lot of liberty and they use it well. And I learn a lot from them too. It’s an exceptional exchange, something I’ve never experienced in any other companies.” 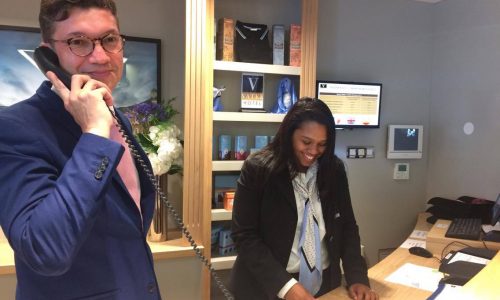 In line with the educational goals of Vatel Bordeaux when opening its new campus in 2015, Eric would like to work on quality, innovation and greeting and welcoming guests.

“My main goal for next year is to introduce 5* service in a 4* hotel. We’ve already improved the rooms and now we must focus on greeting our guests in a personalized way. The front desk is a central department in a hotel as it receives of course all the compliments, but also all the complaints clients have. Greeting and welcoming them is the key!”

So, as of the next student intake, students will share high-responsibility jobs with the creating of a new job for those in their second Bachelor year: Chief Concierge and a new job for third year Bachelor students: Rooms Division Manager.

“Beginning from their very first year of studies, Vatel Bordeaux students will have the opportunity to do high-responsibility tasks and manage younger students. That’s the best way to make sure they’re motivated. We do one of the most difficult lines of work in the world, and our life is often the opposite of normal lives. It’s really important that these future professionals are aware that they’ll have a lot of sacrifices to make.”

The students are pleased to discover this new director who is always ready to listen to them.

“Eric is an excellent teacher,” said Delphine, a first year Bachelor student. “After a two-month internship with him, I’m already autonomous, and that’s what I was aiming for. He’s patient, he takes the time to explain everything to us, even does it ten times if we don’t understand, and explains his goals. But what inspires me the most, is how he is detail-oriented, and his eagle eyes, whether it’s on choosing bouquets of flowers or updating reservation procedures.”

When I was concluding this interview, the students stopped by to greet their new director. That’s when he told me about his secret for a successful career: “To be a good manager, you always have to keep the door to your office open, be present, be ready to listen. You have to share and discuss things; I need these young adults, they nourish me.”