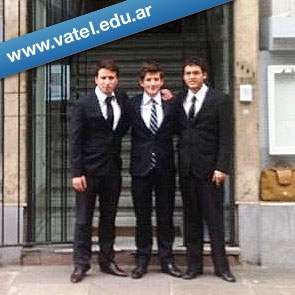 His first impressions one month after his arrival in Buenos Aires:

When he began his studies at Vatel in Bordeaux last year, Léonard Varangot was determined to take full advantage of all the opportunities offered by the school. Thanks to time spent living in the US at the age of sixteen, he had acquired a taste for travel and the desire to live life to the fullest. So it was only natural that he should decide to take part in a Marco Polo programme in Buenos Aires.

At the age of sixteen, between my second and last year at lycée, I had already spent a year abroad in the US to improve my English. When I decided to study at Vatel, I never imagined spending three or five years in France. I wanted to learn more about the rest of the world, discover new cultures and new ways of working, and especially to improve my Spanish, which was relatively mediocre.

–       Why did you choose Buenos Aires from among the various Vatel schools?

I wanted to go to a Spanish speaking country and stay there for a year to immerse myself totally in the language. I had the choice of going to Madrid or Buenos Aires. The school in Asunción, Paraguay was still too young. I finally made up my mind to go to South America.

–       What were your first impressions upon arriving?  Did you feel disoriented?

Buenos Aires may well be the “most European” South American capital, but it is still a far cry from what I was used to, and the similarities with France are few and far between. The Argentinians are extremely friendly and have a rare joie de vivre. For instance, there are numerous people singing and dancing in the streets. The driving is somewhat chaotic and you absolutely need to have a horn in good working order! The gaps in standard of living from one district to the next can be incredible. There are favelas located just a few hundred metres from the business district! Thanks to the openness of the Argentinian people, it is very easy to make friends and feel part of society.

An apartment had been set aside for me, however it had neither hot water nor heating.  Fortunately, a woman I met on the plane offered to put me up until I found somewhere else to live. Not wishing to impose, and also because she lived fairly far from the school, I left after a short while and decided to rent a hotel room. After visiting numerous flats, I was resigned to the fact that I would never find an apartment as clean as in France. However, I did finally end up living in an apartment with six other students from all over the world. I am now delighted with my accommodation and have no desire to move.

–       How does the programme in Buenos Aires differ from Bordeaux, and what do you think of it?

In Buenos Aires, there are no alternating theoretical and practical sessions. the Argentinian government doesn’t authorise it. The students are able to work half-days and thus have a salary. That’s why I have a part-time job as a bartender close to where I live.

Courses are taught very differently than in Bordeaux, but they are no less interesting. I was aware before coming that practical training was not obligatory for me. That’s why I feel it is preferable to find out a maximum amount of information from the school before leaving to know exactly what to expect.

–          Even if it may be a little too early to say, how would you describe the Marco Polo programme?

The programme meets all my expectations and is conducive to the sort of open-mindedness that is essential in the hotel industry. It is helping me to discover new cultures, to know how to welcome clients from different countries, and to seriously improve my linguistic skills while continuing my studies with Vatel. I cannot recommend the programme strongly enough to other students.